I carry mine with me everywhere, do you?  Get yours today.  High quality full color metal coin with the Combat Shillelagh logo on the front, and our organization credo (Ancient Arts, Modern Times) on the back.  The mythos of the challenge coin has a rich and deep history and we wanted to bring that camaraderie to our training hall and to our students around the world.  If you know, you know.  If you are new to challenge coins, then this one is a great way to get started in the brotherhood.  This is an awesome piece that you will be proud to show and share with your friends and fellow students.

What are challenge coins?

Military commanders often give pocket-size medallions, called challenge coins, to service members as a mark of camaraderie. A commander’s unique coin — often copper, bronze or nickel — carries symbols and mottos denoting the unit or office. Coins are usually circular, but also can be pentagons, spades or even dog tags to be worn around the neck.

Throughout their service, military members use the coins to prove their allegiance when challenged. High-ranking officers and retirees often display a collection of coins in their offices alongside uniform patches and ribbons as a symbol of pride.

Where did this tradition come from?

Challenge coins were never officially sanctioned, so the history behind the tradition is widely debated among military historians.  A common narrative purports that a wealthy American lieutenant in World War I distributed matching bronze coins to his unit members before they were deployed. When an American fighter pilot was captured by Germans and escaped to a French outpost, he was assumed to be a German spy — until he presented the challenge coin around his neck. According to the tale, the coin saved his life — and earned him a bottle of French wine as reparation.

Other historians believe the tradition began in an infantry-run bar in Vietnam, where patrons were required to present enemy bullets or their challenge coin upon entrance.

In keeping with either narrative, challenge coins still earn service members their share of alcohol. Military members often tap their challenge coins upon meeting in a bar — shouting, “Coin check!” — and anyone who either cannot produce one or is the last to show it buys the first round of drinks.

In our system, we utilize the Challenge Coin as a sign of respect for one another as fellow students in the martial arts.  We take care of each other, we train safely, we help each other out.  Oh, and we carry a coin with us at all times!  Because you never know when you might get “Coin Checked”!  If you get coin checked and you don’t have a challenge coin on you, then guess what?  YOU get to buy the next round of drinks!

There are no reviews yet.

Only logged in customers who have purchased this product may leave a review. 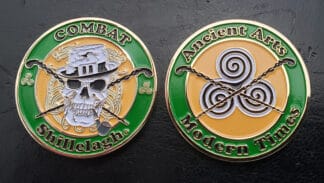 Limited Time Sale on the Big Black Belt Bundle Package! Check it out in the store Dismiss